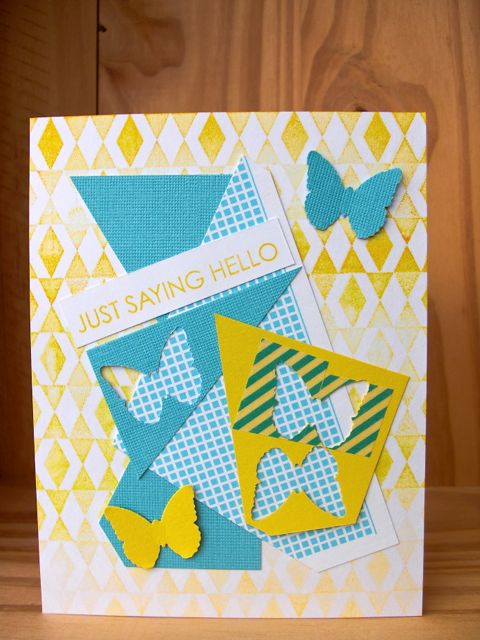 This little scrap card--and the Moxie Fab Challenge inspiration that sparked it--took me back to my college and teaching  days when I came up with a lesson plan to do for an art methods practicum. It was all about positive and negative design. We talked about the color wheel and complementary color, then the kids picked their combinations and cut out their own designs on a fold. Next, they cut each positive and negative in half and arranged them opposite one another on a background. I've always been fascinated with negative space and love to pop things out on my card designs and look for shadow play when I take photographs and arrange design elements.
I always enjoy coming up with a scrap card once in a while since I usually can't bear to part with bits left over from other projects. As an elementary classroom teacher one of the favorite items in my classroom was always the "scrap box" which was rather large compared to the shoebox I keep on my paper crafting desk now. It was a regular grocery box--and always full of all kinds of fun things I and my students saved from trash bins at home and at school.
The scrap box was always good for whatever emotion might provoke us from despair, or anxiousness, to celebration and daydreaming. When kids were finished with work and had a spare few minutes, or during a rainy day recess indoors, they would visit the well of creativity in the corner under the window. As for their teacher...I curated a gallery to rival any Museum of Fine Art!
Thanks to Moxie Fab friend Cath for more than one terrific challenge to play around with on a sunny afternoon. You should check them all out for yourself and join in on some fun:

The Ombre Challenge
In what ways will you put your own stamp on these?
at March 25, 2013 5 comments: 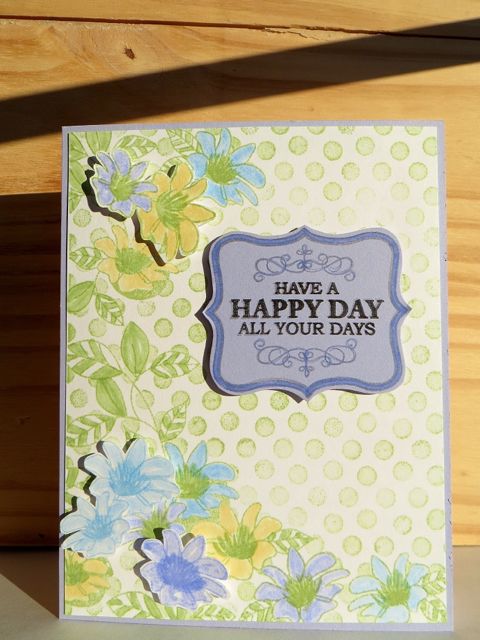 Good and Happy Day one and all! The family is up early to get ready to head out to our local 4H Activities Day! The kids are going to be speaking, modeling sewing projects, and helping run the shindig. It's always a fun, relaxing, and happy day--but most of all it's an opportunity to learn something new and watch the youth of the community shine! Wishing you all of these things today as you head out wherever you live!
at March 23, 2013 No comments: 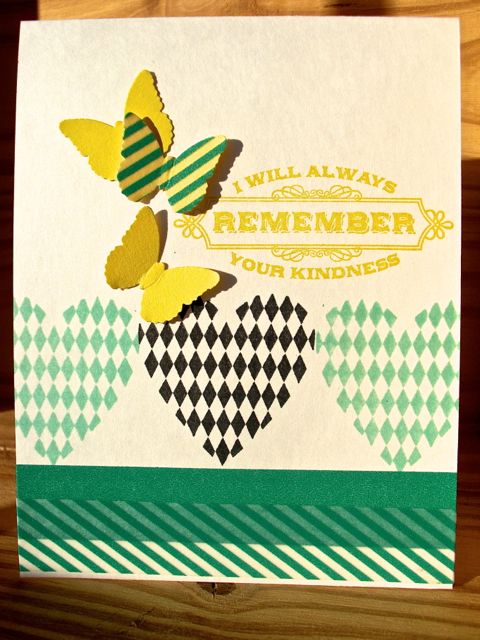 Our Moxie Fab friend Cath has put up a lot of fun challenges this month--this is an entry I'm putting out in the washi tape category! I love how I can quickly add pattern to card stock--as I did on the border, and I also wanted one of the punched butterflies to match--because it's translucent, we can see the yellow card underneath in the wings and voila! a pattern play fit for spring! Do try it yourselves won't you? and make sure you check out Moxie Fab World!!
at March 20, 2013 3 comments: 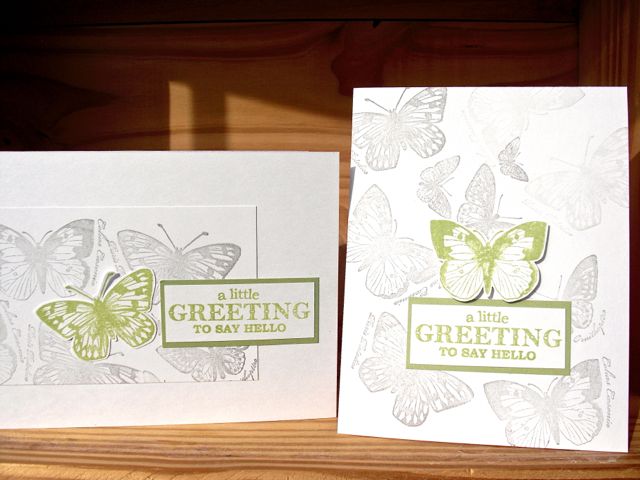 Spring is supposed to be here...as I gaze out at the foot of snow she saw fit to deliver us instead! It is bright, beautiful, and COLD! So, I'm making my own spring. I've been inspired by the color palette over at one of my favorite stamping sites, Hero Arts Blog, and their contest this month which is all about hello cards and anything spring/Easter themed! Do check it out for yourselves and see what you come up with! I have to say my mood has brightened significantly while playing around with some soft colors. I plan to make a few more in this series of designs--these Hero butterflies have taken me on a flight of fancy. Enjoy your evening everyone!
at March 20, 2013 No comments: 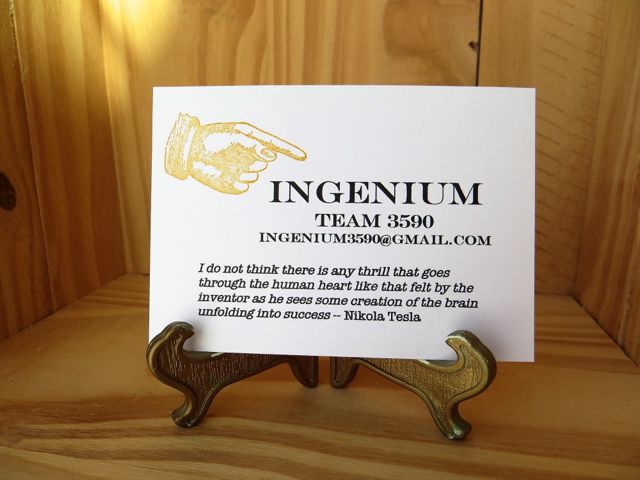 Hello Everyone! Have I got big news! Team Ingium 3590 is headed to the FIRST FTC World Championships! They won the Inspire Award at the first ever Vermont State Championship Tournament. It is a huge honor especially to my kiddos who live, breathe, eat, and sleep robotics! To win Inspire is what they've been striving for since they became involved in FTC three years ago. It is the ideal to which everyone aspires--the most well-rounded/all-about-the-journey quality, commitment, and learning which is so difficult to see nowadays in but a few. [Do I sound old, and jaded? I am after all a Boomer and it just seems to me that I sound more like my Nana every day...she was a pioneer who went west in a covered wagon as a child...really.]
Many teams think it's about the competition, and that's cool--but there are also many who think it's about igniting the fire to be an engineer or other math/science professional.
I am just happy I can help out occasionally and tag along for the ride to watch all the incredible people we meet. At Worlds there will be teams from all over the US and 16 different countries! Wow! Geek power! Here's a picture of one view of the robot:

One way I contributed is helping with team calling cards, and coming up with an idea to decorate their robot's ramp. [Have I mentioned lately I love Pinterest?] I tried a tutorial I pinned and it worked beautifully to transfer the team's design to their ramp--which deploys during the final 30 seconds of the game to allow their Alliance Partner to drive up and be fork-llifted into the air for many points. It was particularly gratifying when in their first round at VT they let the ramp down with a satisfying thwack--and there--for all the world to see on streaming video--the magic Ingenium I--like a helo-pad to destiny....[who says crafting doesn't have other rewards?!] 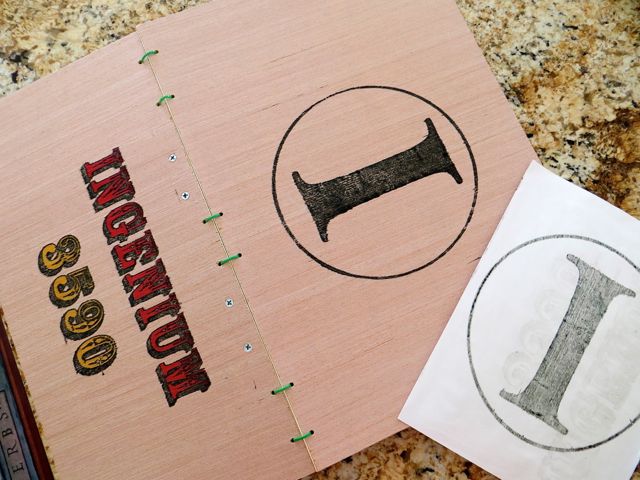 Check out my Pinterest boards for this idea and others that strike my fancy and inspire ingenious ideas! A special thanks to Lesa here for her excellent, easy tutorial that saved us so much work! Make it a great weekend everyone!
at March 01, 2013 No comments:

SHOP this project, Rooted In Nature Sometimes we forget the simplest things as we learn new ways to do things. I was reminded how much f... 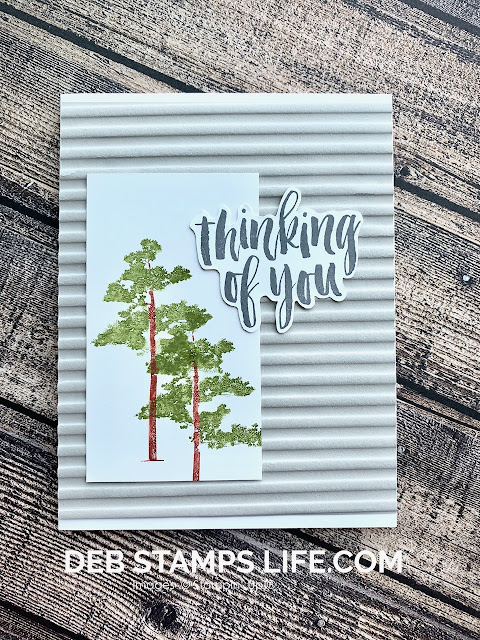 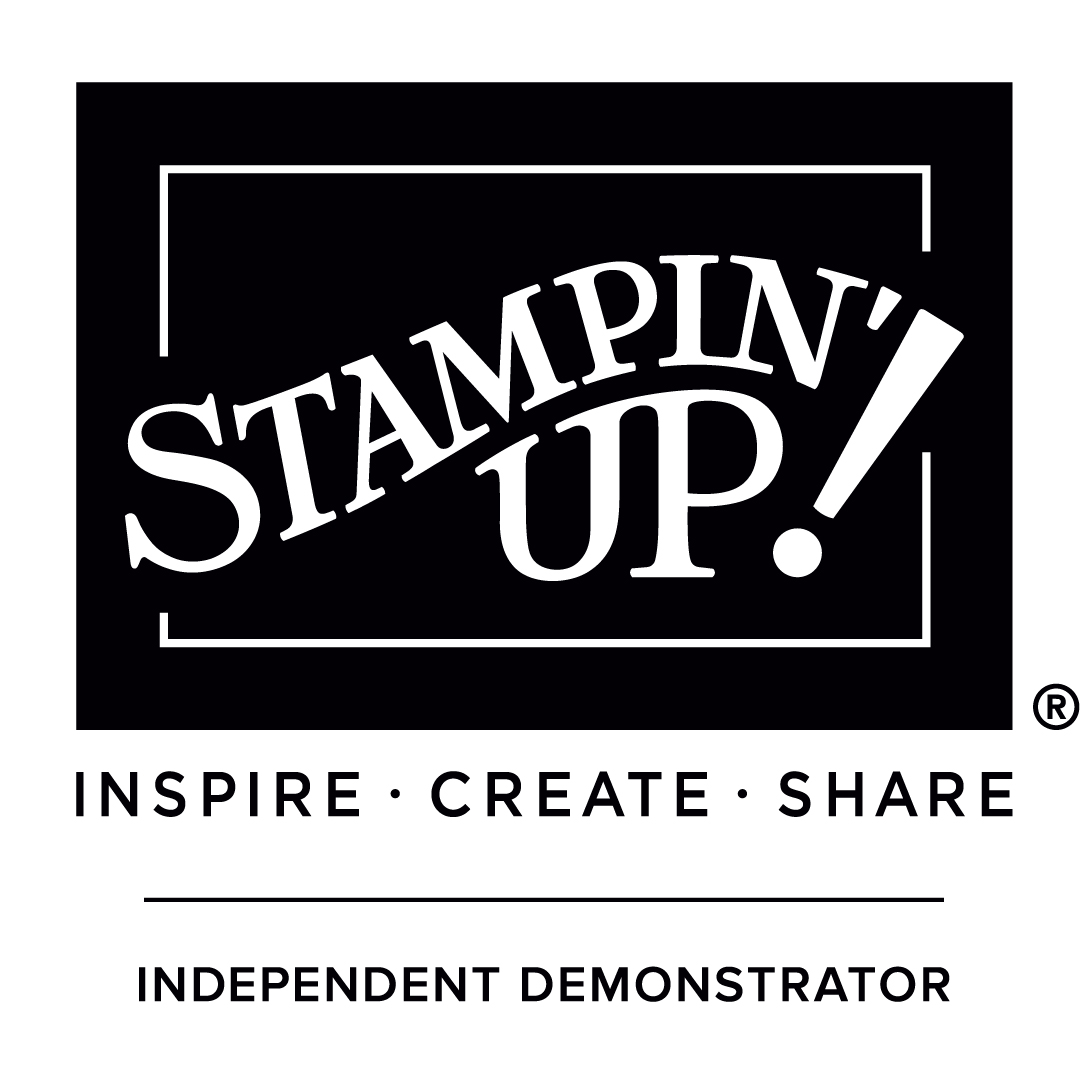 Deb Stamps Life
Bozeman, Montana, United States
Dedicated to helping others recognize their unique contribution to the world through creativity.

Let me know how I can help you put your own stamp on life!